Let’s be honest….how many of us actually know the meaning behind the family traditions we follow? Most of the time we accept them because they’ve been passed down through generations or because our Auntie told us to do it!

Think of us as your wedding fairy godmother, granting wishes to brides who’ve wondered about these traditions but never got around to investigating them.

In our African Wedding Traditions Explained series we’ll take a closer look at cultural customs and traditions and break down where they came from and why they’re so important.

First up, one of the most popular African American wedding traditions – jumping the broom. 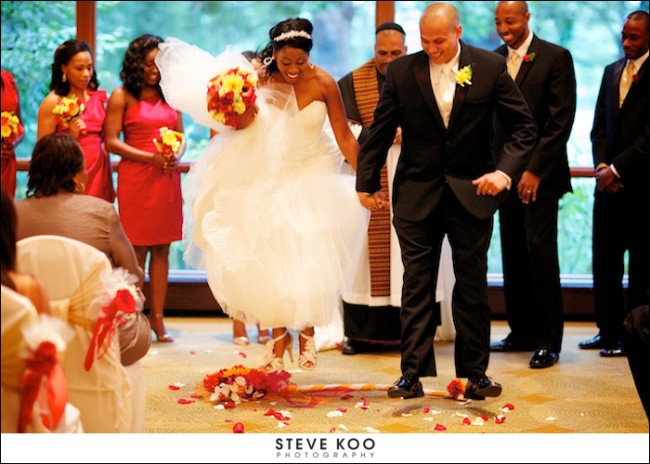 Ask 10 people and you’ll probably get 10 different theories about where this tradition came from.

Most think the custom of the couple jumping over a broom after the ceremony originated during slavery, as a way for slaves to honor forbidden marriages. However, many people acknowledge that it goes back a lot further, to 18th century West Africa.

The broom in Asante and other Akan cultures in Ghana held spiritual value and symbolized sweeping away past mistakes or getting rid of evil spirits. The brooms were waved over the couple’s heads to ward off spirits. The couple would often jump over the broom at the end of the ceremony. It also symbolized the wife’s commitment or willingness to take care of and be committed to her new home.

During slavery this practice was used by slaves brought from the Asante area to strengthen marriages among their communities.

Many other cultures use brooms as part of their ceremonies. Celts, Scots, Gypsies, Wiccans and Asian cultures all have broom-jumping traditions. 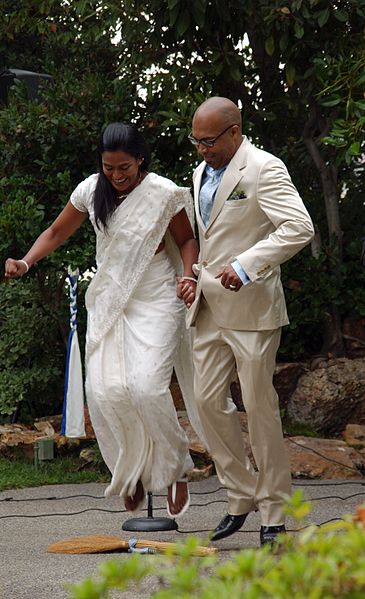 Over the last 40 years or so it’s become a favorite with African American couples who choose to honor their ancestors and pay respects to their African lineage. Some buy decorated brooms or decorate their own and have attached more modern meanings to the ritual.
For example some believe the straws of the broom represent family, the handle represents God and the ribbon stands for the tie that binds the couple together.

Whatever your interpretation, the phrase ‘jumping the broom’ is now well and truly a part of wedding lingo and it’s a tradition that’s full of history and significance.